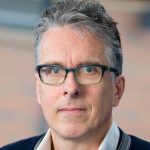 Ed Bullmore trained in medicine at the University of Oxford and St Bartholomew’s Hospital, London; then in psychiatry at the Bethlem Royal & Maudsley Hospital, London. He moved to Cambridge as Professor of Psychiatry in 1999 and is currently Co-Chair of Cambridge Neuroscience, Scientific Director of the Wolfson Brain Imaging Centre, and Head of the Department of Psychiatry, in the University. He is also an honorary Consultant Psychiatrist and Director of R&D in Cambridgeshire & Peterborough Foundation NHS Trust; and, since 2005, he has worked half-time for GlaxoSmithKline, currently focusing on immuno-psychiatry. He has published more than 500 scientific papers and was listed by Thomson Reuters (2016) as one of the top 1% most highly cited scientists globally in Neuroscience & Behaviour and in Psychology & Psychiatry.