Patient and Public Involvement in Research

We need Patient and Public Involvement (PPI) to help researchers do research that meets your needs. Without PPI, scientists plan their research based on what they think patients want and need.  This can lead to studies that few people want to take part in, treatments that patients won’t like or information that people don’t understand. However, when patients and researchers work together, research is more likely to be acceptable, useful and easy to understand. Most importantly, your input gives researchers another point of view so that they can understand what priorities are most important to you.

At Cambridge BRC, we aim to involve the public in all our research by providing a range of options so that you can find one that suits you. Read more about our PPI Strategy here.

Meet some of our panel members 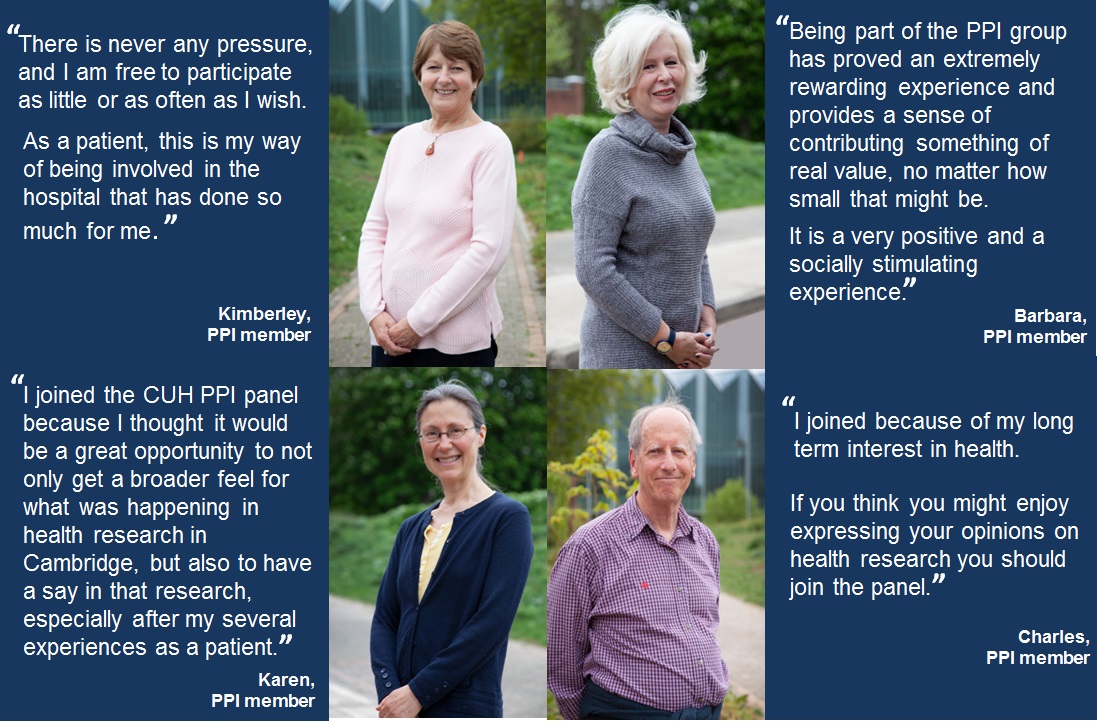 If you would like to join or find out more, please complete the enquiry form below

We can help with your PPI needs.

The CUH Patient and Public Involvement (PPI) Panel Coordinators are available to give advice and support for researchers engaging with PPI. We can also assist you with access to the Panel who will review documents, attend focus groups and help you to incorporate the views of the public into your proposals and on-going research. Here’s what colleagues have said:

‘I went through all the suggestions one by one and systematically applied changes to the documents. The documents read a lot better after the edits.’ Dr Gaby Captur Clinical Lecturer and NIHR Rare Diseases Translational Research Fellow

‘Your comments have been incredibly useful – in particular pointing out parts of the summary that are confusing. I have now extensively revised this based on your advice, and the advice of other groups. Many thanks to all of you.’ Mr Stephen Price Consultant Neurosurgeon NIHR CLAHRC Fellow

‘All the feedback was very helpful and I expect it to impact positively on the study.’ Dr Audrey Melvin Clinical Research Fellow University of Cambridge

Read how patient and public involvement is making a difference.

What? Professor Rebecca Fitzgerald and team have developed a new diagnostic tool for Barrett’s Oesophagus called the cytosponge. Barrett’s oesophagus is linked with the occurrence of oesophageal cancer. The cytosponge has been extensively tested in studies with patients and healthy volunteers at the Cambridge Clinical Research Facility. The team now want to find out if the tool can be used effectively in GP surgeries, and prove if it can be used to diagnose Barrett’s oesophagus early and therefore detect patients who might be at risk of developing this cancer.

The CUH PPI Panel volunteers were involved in reviewing the study design and protocol, patient information sheets and summaries, and have received feedback and updates on trial progress.

How? They met as a focus group to hear a presentation from the study data coordinator and research nurse and to provide feedback on study documents. There have been subsequent meetings to update the group on progress. The panel asked many questions including how GP surgeries were chosen and why not all GP surgeries. The team explained that GP surgeries close to endoscopy units were chosen in case of any emergencies, for example, swallowing of the capsule and string. They also need to have some GP surgeries as control groups to assess the normal level of diagnosis in the community.

Why? As a result of the focus group, patient information sheets were simplified and the ethical considerations and selection choices explained. The public group are now informed of progress and hope to retain a role in oversight for further research. The research team were hugely appreciative of the support they received and are now advocates for the early involvement of patients and the public in the research process.

Would you like to get involved with research? Find out more here.

We have three roles currently available: Research Reader If you are interested in research and enjoy reading, this flexible role (with no travel required) could be for you. Please see our guide for more information.

Focus group, Steering group or Advisory Panel member If you enjoy meeting people and discussing a wide variety of research work, you may enjoy this role. See our guide for more information.

Patient and Public Involvement in Research 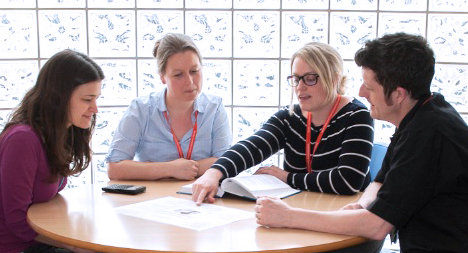