The number of women in top clinical academic posts at the School rose from 13% to more than 17% over 2012-17 – and they want that figure to increase even more by reaching out to young female medics and other health care professionals as well as school and college students.

Speaking ahead of International Women’s Day on 8 March, they outlined to the NIHR Cambridge BRC how women can succeed in a male-dominated profession.

Florence Nightingale Foundation Chair of Clinical Nursing Research Prof Christi Deaton, from USA, said: “We want to encourage nurses, midwives and allied health professionals [still largely female professions], who may have had little or no exposure to research training in their undergraduate courses, to develop research skills and address questions of importance to patients and their practices.

“We help them with training and link them with senior researchers who can take on a mentoring role.”

Prof Deaton benefited early on in her career from having a role model who mentored and encouraged her – at a time when nurses were not expected to be researchers or scientists. She said: “In the US children learn about Sacagawea, a Native American woman who guided explorers Lewis and Clark across the wilderness to the Pacific Coast.

“My colleagues and I called our mentor [Professor Sandra Dunbar] Sacagawea because she always led the way!”

Professor Fiona Karet is a renal medicine researcher and also the School’s Director of Organisational Affairs. She led the School to achieving and renewing an Athena SWAN Silver award – which recognises advancement of gender equality – and part of her remit is to even the playing field for women in research, especially in mid-career.

Prof Karet said: “Outreach is an important part of all our roles. We talk to young female medics about the possibilities open to them and we visit schools and colleges to talk about our work and inspire future researchers.

“Senior male engagement is critical to changing the landscape for aspiring women clinical academics and we have worked hard on this, and also to provide confidence building and other training opportunities for women at this stage when many drop out.”

This is appreciated by women at all stages of their academic career, including Professor Rebecca Fitzgerald, part of the research team that developed the ‘pill on a string’ which can detect oesophageal cancer at an early stage.

She said: “My research team includes talented women with the potential to succeed in clinical academic posts, and it’s important for them to have good support around them, so that they have the confidence and self-belief to progress in their careers.

“Our role as senior clinical academics is to remove the barriers stopping women from applying for these senior posts and show the way.”

Obesity researcher Professor Sadaf Farooqi said: “At any early stage in my career, the top clinical jobs were mostly held by men– there were very few female role models.

“That situation is changing. Here in Cambridge, people like Rebecca are making ground-breaking discoveries in diseases that kill many people. There will be girls who will read this article and see Rebecca Fitzgerald and I hope they will think that may be one day they might be able to do that.” 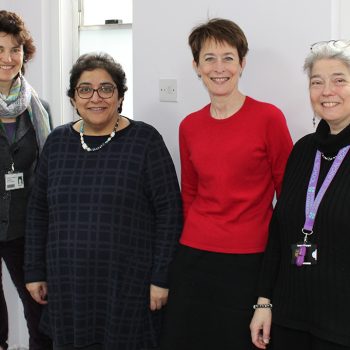