The National Institute of Health Research (NIHR) Inflammatory Bowel Disease (IBD) BioResource are celebrating the recruitment of their 1,000th patient to their research programme.

In the UK, more than 300,000 people are affected by IBD. The exact causes of Crohn’s disease and Ulcerative Colitis are unclear, but there is evidence that IBD can cluster in families and having an affected family member is a risk factor.

In January 2016, a new research resource was launched nationally to recruit people with IBD to help investigators better understand Crohn’s and colitis and find new treatments. The NIHR IBD 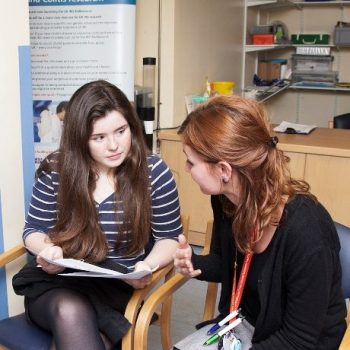 BioResource sits within the NIHR BioResource – comprising volunteers from around the England who are willing to be approached to participate in research studies and trials on the basis of their genetic makeup or clinical features.

The NIHR IBD BioResource began in Cambridge just over a year ago, and the team have had a lot of interest across the country from people who want to take part. More centres are opening up for recruitment. Cambridge has recruited its 1,000th patient, and nationally 1,000 more have been recruited in the last few months alone.

The IBD BioResource recruits people diagnosed with Crohn’s disease or Ulcerative Colitis and asks them to provide a small blood sample and clinical data. Researchers then study the genetic makeup of these samples. People who sign up to the IBD BioResource are then invited back to participate in future research studies and this could involve giving another blood sample or a stool sample, completing a questionnaire or participating in a trial.

Dr Miles Parkes, a consultant gastroenterologist at Cambridge University Hospitals and national lead for the NIHR IBD BioResource project, said: “We have been delighted by the positive response to this project since we launched it in January 2016. 1,000 of our Cambridge patients with Crohn’s or colitis are now signed up to help research into these conditions – and we hope that many more from around the UK will join in the months ahead. We want to get 25,000 recruits over the next 3 years. The whole point is to have an interactive resource which allows the amazing progress in genetics seen in recent years to be translated into clinical benefit.”

Wendy Edwards, Research Manager at Crohn’s and Colitis said: “The recruitment of the first 1000 patients to the IBD Bioresource is a landmark moment and we are delighted to have part funded the project. With access to this growing resource, researchers can identify new pathways to better diagnosis and treatments for Crohn’s Disease and Ulcerative Colitis. The IBD Bioresource offers new hope to people who live with these chronic conditions on a daily basis, by opening new doors to new discoveries.” Researchers hope more people will come forward to sign up as volunteers for the NIHR IBD BioResource, to help better understand IBD and develop new treatments for those who are living with this condition.

More information can be found at: NIHR IBD BioResource or NIHR BioResource 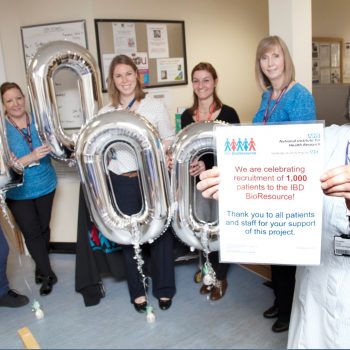