New funding boost to speed up diagnosis in oesophageal cancer

Some people who have long-term symptoms of heartburn or acid reflux may go on to develop a condition called Barrett’s oesophagus. This is where abnormal cells develop which could turn into cancer.

This type of cancer can be hard to detect until the late stages and for some it becomes life-threatening. Therefore, early intervention is important in order to start treatment as soon as possible.

Today (Friday 3 July), the Government has backed funding of £16 million to six of the UK’s most innovative specialist health projects, to develop precise medical solutions and improve early detection in some life-threatening diseases such as cancer and Crohn’s disease. It will mean patients could receive earlier and a more accurate diagnosis.

As part of the Government’s announcement, Cambridge has been selected for one of these health projects in improving early diagnosis for oesophageal cancer.

Cambridge researchers will lead on the early detection programme with the aim to diagnose up to 50% of oesophageal cancer cases earlier, which means patients can start treatment sooner, ultimately saving more lives.

Science Minister Amanda Solloway said: “Our brilliant scientists and researchers in Cambridge are harnessing world-leading technologies, like AI, to tackle some of the most complex and chronic diseases that we face.”

“Tragically, we know that one in two people in the UK will be diagnosed with some form of cancer during their lifetime.

“The University of Cambridge project we are backing today will help ensure more lives are saved and improved, as it aims to diagnose up to 50% of oesophageal cancer cases earlier.”

Other projects receiving funding include:

Of the £16 million awarded today, over £13 million will be delivered by the Government, while up to £3 million will be made available from Cancer Research UK, to specifically support the oncology focused projects.

The funding, delivered through the Industrial Strategy Challenge Fund, is part of a government programme in data to early diagnosis and precision medicine. The competition is run by Innovate UK on behalf of UK Research and Innovation (UKRI) and forms part of the government’s commitment to increase research and development investment to 2.4% of GDP by 2027. 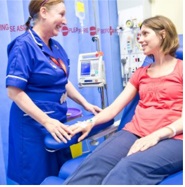