The first study – CHAI – was funded by the British Heart Foundation and supported by the NIHR Cambridge BRC. CHAI study is the first prospective human study to quantify hypoxia in atherosclerosis using 18F-fluoromisonidazole (FMISO) PET. Symptomatic carotid plaques were found to be more hypoxic than asymptomatic lesions, potentially identifying a novel target for drug therapy. The robust correlation between 18F-fluorodeoxyglucose (FDG) and FMISO signals suggests that hypoxia contributes to the FDG signal in FDG PET studies of atherosclerosis.

The second study – VISION – was funded by the Wellcome Trust and supported by the NIHR Cambridge BRC. In the study, 68Ga-DOTATATE PET has been used successfully as a novel marker of atherosclerotic inflammation. Compared to FDG, 68Ga-DOTATATE offered superior coronary imaging, excellent macrophage specificity and better power to discriminate high-risk vs. low-risk lesions.

Both papers have been published in the same issue of JACC (Vascular imaging with 18F-fluorodeoxyglucose positron emission tomography is influenced by hypoxia; Detection of atherosclerotic 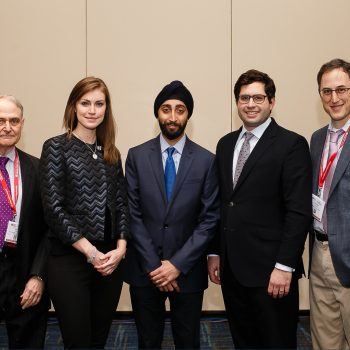 inflammation by 68Ga-DOTATATE PET compared to 18F-FDG PET imaging). The research is hoped to open up new therapeutic avenues for atherosclerosis, the leading cause of death in the UK and worldwide and the driver of most heart attacks and strokes.

The studies reflect the hard work of many people, cutting across disciplines within the Clinical School and beyond. For his work on the VISION study, Dr Jason Tarkin (pictured 2nd from right) was awarded the Young Investigator award from the American Heart Association in November 2016. For his efforts in the CHAI study, Dr Francis Joshi was awarded an American Heart Association Early Career Investigator Award and a British Atherosclerosis Society Binks Trust Award.