May 2021 is an important milestone for the National Institute for Health Research (NIHR) IBD BioResource as it marks their fifth year of helping to transform the research landscape in Crohn’s disease and ulcerative colitis (collectively known as Inflammatory Bowel Disease or IBD) – and what better way to celebrate this anniversary than World IBD Day held on 19 May.

What is the NIHR IBD BioResource?

The team support research by connecting leading IBD clinicians and researchers with people living with IBD. The concept is simple: NIHR IBD BioResource participating hospitals enrol patients with Crohn’s disease and ulcerative colitis via a national research platform. This enables patients to participate in future research studies which helps accelerate research into IBD.

The NIHR IBD BioResource launched in January 2016 and rolled out nationally in May 2016. The Cambridge-led research initiative is now open in over 100 NHS hospitals across the UK and has almost 35,000 patients with Crohn’s disease and ulcerative colitis taking part.

Professor Miles Parkes (right), consultant gastroenterologist at Cambridge University Hospitals and Chief Investigator of the NIHR IBD BioResource says: “This has been an extraordinary five years and I am so thrilled to see how much the NIHR IBD BioResource has grown and the many ways in which it is now supporting IBD research. Our team have worked hard to get recruitment up and running nationally and we have received wonderful support from colleagues at our UK sites. We also have an amazing cohort of patients willing to take part in research and I want to thank everyone involved. Without them our research really couldn’t happen.”

What is IBD and why is research needed in this area?

Inflammatory Bowel Disease (IBD) is a term used to describe two conditions, Crohn’s disease and ulcerative colitis, which together affect around 500,000 people in the UK. It is a life-long disease with no known cure and what causes it remains unclear.

People with the condition often find themselves in severe pain and suffer with abdominal cramps, recurring diarrhoea, bloating, weight loss and fatigue. The medical treatments do not always work for some people, and currently there is no way to predict which patients will most likely benefit from which treatment option, or who will develop side-effects. In some cases, where treatments don’t work or complications of IBD develop, patients will need to undergo surgery to remove parts of their bowel.

Following in the footsteps of the UK IBD Genetics Consortium and as part of the NIHR BioResource, the NIHR IBD BioResource was developed in Cambridge five years ago. It was created to drive the genetic discoveries of IBD into functional and clinical translation and develop better treatments for the disease. It also aimed to provide people who are diagnosed with the condition the opportunity to participate in research.

Taking part in the NIHR IBD BioResource for both patients and clinical teams is easy:

Enrolled patients become members of the NIHR BioResource. Samples and collected data from the recruited patients form the basis of the IBD BioResource panel which is accessible to all researchers from science to industry through a simple application process. Patients can be selected on specific criteria and invited to participate in studies to research IBD and other conditions. Future participation may involve giving another blood or stool sample, completing a questionnaire or participating in a clinical trial.

Range of studies facilitated by NIHR IBD BioResource include:

Miles Parkes explains: “IBD affects large numbers of people and its causes are not currently well understood. Research is important both to help us better understand these causes, in the hope that preventative strategies become possible in the future, and to help us move on from a ‘one size fits all’ approach to treatment and medication, to something more tailored to the individual. The NIHR IBD BioResource allows us to tackle both questions – to help researchers to create better, more personalised treatments and improve our knowledge of the disease.”

While COVID has slowed some elements of research, the NIHR BioResource has proudly continued supporting vital applications throughout the pandemic and facilitated important studies looking at the impact of IBD drug therapies and COVID-19 infection. Details about all current and active studies can be found here.

The NIHR IBD BioResource – a success story for all involved!

“I jumped at the chance to join IBD BioResource in 2018. Being part of this collaborative resource means IBD researchers can access real, meaningful patient data. For people living with Crohn’s disease or ulcerative colitis, our data paves the way in shaping personalised treatments and knowledge of IBD, which is so helpful in our care, both now and in the future. It’s easy (and free) to join IBD BioResource – just ask your IBD team to sign you up!”

Dr Ajay Verma, consultant gastroenterologist and Physician at Kettering General Hospital NHS Foundation Trust and local Principal Investigator for NIHR IBD BioResource “As a research active Gastroenterology department, it was a “no-brainer” to participate in theIBD BioResource, which is clearly an important project to biobank samples from thousands of patients with Inflammatory Bowel Disease. This has the potential to unlock large multi-centre trials on many aspects of IBD care and treatment for many years to come. After joining the IBD BioResource family, it was clear to our team how keen patients are to get involved. We at Kettering General Hospital were very proud to recruit more than 600 patients in two years and mark ourselves out as a top 20 recruiting centre despite being a mid-size Gastroenterology department. We look forward to our ongoing participation in IBD BioResource for the future. Congratulations to the IBD BioResource team on the 5 year anniversary national roll out! ”

Professor Ailsa Hart, Director of St Mark’s Hospital for IBD Research and consultant gastroenterologist. “The IBD BioResource is a very attractive and cutting edge resource of patients with IBD, from which subjects meeting inclusion criteria for approved downstream functional and clinical studies can be identified and recalled for scientific and clinical research. Proposals to use the IBD BioResource are reviewed by the NIHR BioResource scientific advisory board, whose representatives are very prompt with responses and queries with a ‘can do’ attitude. Recall of patients for approved projects are handled with professionalism and expertise, through a clearly well-functioning and efficient team who helped in dissemination of emails to the target patients. The IBD BioResource was an integral part of our recent study demonstrating a new PROM (Patient Reported Outcome Measures), Crohn’s Anal Fistula Quality of Life Scale (CAF-QoL). It required ‘test-retest’ of questionnaires with a specific time frame in between, which meant lot of coordination of correspondences and communication between patients with the study team, with significant contribution from the BioResource. With the help of the team at BioResource, this provided the numbers of participants required and a smooth and timely communications between them.”

Future of the NIHR IBD BioResource and IBD research

The trials and tribulations of recruiting a large cohort of patients while facing unforeseen challenges such as the COVID-19 pandemic, has taught the NIHR IBD BioResource some important lessons and enabled us to develop better processes. For example, the team are currently exploring ways to enable ‘e-consent’ and remote recruitment (e.g. outside hospital) into the study.

The success of NIHR IBD BioResource remains unprecedented and has led to a flourishing partnership with the Health Data Research Hub for IBD or ‘Gut Reaction’.

Gut Reaction aims to build on the high-quality health data already held in the NIHR IBD BioResource by combining it with ‘real-world’ data from participating NHS hospitals and the UK IBD Registry. This will allow researchers to use powerful pooled data to support important research into IBD.

As part of World IBD Day, the team are ever grateful for all the IBD patients who take part in research, both in the UK and worldwide. They wish to thank their funders: The National Institute for Health Research (NIHR), the Medical Research Council, the Wellcome Trust, Open Targets, Crohn’s & Colitis UK, the Helmsley Charitable Trust and our Industry partners. 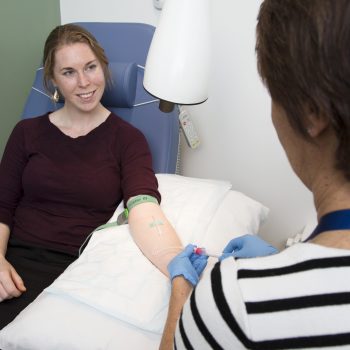