A study led by Addenbrooke’s Hospital and the University of Cambridge has shown that people with high blood pressure are more likely to be admitted to hospital or die from COVID-19, regardless of other factors such as age, sex, ethnicity or BMI.

The research, published this week in the Journal PLOS ONE, is the first study to show the extent to which high blood pressure, known as hypertension, can be directly linked to patients developing severe COVID-19.

It also showed that the type of medication people were receiving to treat hypertension did not appear to modify this risk.  In addition, those patients who had poorly controlled blood pressure i.e. above treatment targets, were at the highest risk of dying or being hospitalised.

The study findings may help explain why ethnic minority and low-income groups were disproportionately affected by COVID-19, as hypertension is more common in these individuals, and rates of blood pressure control poorer (see notes).

The research has important implications for public health priorities, given that hypertension is already the leading risk factor for death in the UK.

It also comes as rates of blood pressure control have worsened in the UK, due to the pandemic, with the number or people being screened and identified with the condition dropping as well (see notes).

Holly Pavey is lead author of the study and a British Heart Foundation (BHF) funded PhD student at the University of Cambridge.  She said:

“Before this research, it wasn’t clear to what extent high blood pressure was putting patients at greater risk of hospitalisation or dying from COVID-19.  Other factors such as age, socio-economic status, sex, ethnicity and BMI were all in the frame too as increasing the risk of severe COVID-19.

The research was supported by the NIHR Cambridge Biomedical Research Centre and use data from the UK Biobank, a research database, containing in-depth genetic and health information from half a million UK volunteers. The study included over 16,000 of these individuals who had tested positive for COVID-19 and who had linked GP records, death records and COVID-19 lab results.

Researchers analysed data up until early 2021, which helped to reduce any bias from new variants of the virus, which were much more transmissible, as well as reducing any bias from the effects of widespread vaccinations.

However, the UK Biobank volunteer population is generally healthier than the general UK population and has relatively few participants from ethnic minority groups, so generalisations to the wider UK population need to be undertaken with caution.

Even though the death and hospitalisation rate due to COVID-19 has been hugely reduced over the last year due to virus mutations, the NHS vaccination program and availability of effective treatments, this research highlights the importance of having well-controlled blood pressure, in case of new, more severe strains of COVID-19 or other viruses in the future.

Ian Wilkinson, a cardiology consultant at Cambridge University Hospitals NHS Foundation Trust (CUH) and Professor of Therapeutics at the University of Cambridge, is the study’s senior author.  He said: “Hypertension remains the leading risk factor for death in the UK and worldwide, despite effective treatments, and disproportionately affects low income groups and individuals from ethnic minority backgrounds.

“Our findings further emphasise the importance of adequate blood pressure control. Unfortunately, post-pandemic, the rates of blood pressure control have worsened, as have the number of people being screened and identified as having high blood pressure. This is now a major public health problem in the UK and needs to be addressed as part of the levelling-up agenda”.

A national trial is currently underway to improve treatments for hypertension, specifically for people from black, Asian and minority ethnic communities.  At the moment most treatments have been tested mainly on white people and it’s not known if these are as effective on other ethnic groups.

Professor Chowienczyk said: “These findings highlight the importance of good blood pressure control, especially in individuals disproportionately affected by high blood pressure and COVID-19, such as those in ethnic minority groups in the UK. The AIM HY_INFORM trial is a major study, funded by the BHF and Medical Research Council, that will determine which drugs are most effective at lowering blood pressure in ethnic minority groups in the UK. This should report at the end of 2023 and will be instrumental in shaping new guidelines for the treatment of hypertension in the UK.” 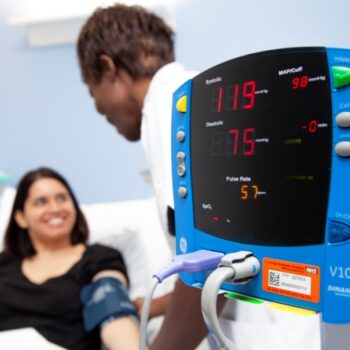