Drinking more than five pints a week could shorten your life, study finds

Regularly drinking more than the recommended UK guidelines for alcohol could take years off your life, according to new research from the University of Cambridge. Part-funded by the British Heart Foundation, the study shows that drinking more alcohol is associated with a higher risk of stroke, fatal aneurysm, heart failure and death.

The authors say their findings challenge the widely held belief that moderate drinking is beneficial to cardiovascular health, and support the UK’s recently lowered guidelines.

The study compared the health and drinking habits of over 600,000 people in 19 countries worldwide and controlled for age, smoking, history of diabetes, level of education and occupation.

The research, published today in the Lancet, supports the UK’s recently lowered guidelines, which since 2016 recommend both men and women should drink no more than 14 units of alcohol each week. This equates to around six pints of beer or six glasses of wine a week.

However, the worldwide study carries implications for countries across the world, where alcohol guidelines vary substantially.

The researchers also looked at the association between alcohol consumption and different types of cardiovascular disease. Alcohol consumption was associated with a higher risk of stroke, heart failure, fatal aortic aneurysms, fatal hypertensive disease and heart failure and there were no clear thresholds where drinking less did not have a benefit.

By contrast, alcohol consumption was associated with a slightly lower risk of non-fatal heart attacks.

The authors note that the different relationships between alcohol intake and various types of cardiovascular disease may relate to alcohol’s elevating effects on blood pressure and on factors related to elevated high-density lipoprotein cholesterol (HDL-C) (also known as ‘good’ cholesterol). They stress that the lower risk of non-fatal heart attack must be considered in the context of the increased risk of several other serious and often fatal cardiovascular diseases.

The study focused on current drinkers to reduce the risk of bias caused by those who abstain from alcohol due to poor health. However, the study used self-reported alcohol consumption and relied on observational data, so no firm conclusions can me made about cause and effect. The study did not look at the effect of alcohol consumption over the life-course or account for people who may have reduced their consumption due to health complications.

Dr Angela Wood, from the University of Cambridge, lead author of the study said: “If you already drink alcohol, drinking less may help you live longer and lower your risk of several cardiovascular conditions.

“Alcohol consumption is associated with a slightly lower risk of non-fatal heart attacks but this must be balanced against the higher risk associated with other serious – and potentially fatal – cardiovascular diseases.”

Victoria Taylor, Senior dietician at the British Heart Foundation, which part-funded the study, said: “This powerful study may make sobering reading for countries that have set their recommendations at higher levels than the UK, but this does seem to broadly reinforce government guidelines for the UK.

“This doesn’t mean we should rest on our laurels, many people in the UK regularly drink over what’s recommended. We should always remember that alcohol guidelines should act as a limit, not a target, and try to drink well below this threshold.”

From the University of Cambridge, adapted from a press release by British Heart Foundation. 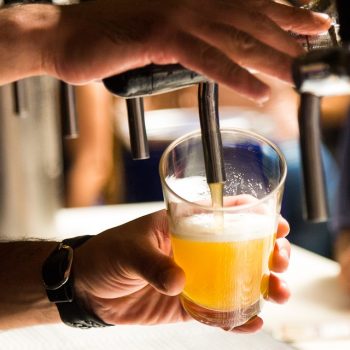