Home » Could repairing damaged donor livers be the key to increasing life-saving transplants?

Could repairing damaged donor livers be the key to increasing life-saving transplants?

Researchers in Cambridge have found a way to grow ‘mini bile ducts’ in a lab-setting to repair damaged livers. This new technique could potentially help treat patients whose own livers are not functioning correctly.

Bile ducts act as the liver’s waste disposal system, and malfunctioning bile ducts are behind a third of adult and 70 per cent of children’s liver transplantations with no alternative treatments.

Currently there is shortage of liver donors. According to the NHS, the average waiting time for a liver transplant for adults in the UK is 135 days and children 73 days. However, when a liver is found it may be unsuitable for transplant. Many end up not being used due to a number of reasons such as the organ sustaining damage whilst being held in cold storage outside the body. This means only a limited number of patients can benefit from a transplant.

With the shortage of livers and bile duct diseases, researchers needed to find an alternative treatment to see if the liver could instead be repaired and found that cell-based therapies may be the key.

Supported by the NIHR Cambridge BRC, Cambridge researchers developed a way to restore damaged bile ducts in donated livers in the laboratory.

Using a recently developed ‘perfusion system’, researchers have been able to show for the first time that is it possible to transplant biliary cells grown in the lab known as cholangiocytes organoids – in the bile duct that act as a barrier between the bile and other tissues – into damaged human livers to repair them.

The research team used a technique known as single-cell RNA sequencing to learn more about the individual cells lining the biliary tree. They found that although duct cells differ, biliary cells from the gallbladder, which are usually spared by bile duct diseases, could be converted into the cells of the bile ducts and replace and repair the damaged ones.

They grew cholangiocytes from the gallbladder using a technology known as ‘organoids’ – small groups of cells that mimic the organ’s function – in the lab. And using the perfusion system, the researchers injected these organoids into a damaged donor liver.

The team were able to demonstrate that the transplanted organoids engrafted and repaired the bile ducts, allowing the liver to function correctly. This new technique has shown that a cell-based therapy could help restore damaged donor livers and may have the potential to fix a patient’s own liver.

This is the first time that a procedure of this kind has been used on human donor organs. It could also increase the number of livers that are considered suitable for organ transplantation and ultimately save more lives.

The research provides a proof-of-principle for the development of new cell-based therapies and this approach could be applied to a range of organs and diseases to accelerate more cell-based therapy research.

Professor Ludovic Vallier (right), theme lead for Transplant and Regenerative Medicine theme at NIHR Cambridge BRC and joint senior author of this study said: “This is the first time that we’ve been able to show that a human liver can be enhanced or repaired using cells grown in the lab. We have further work to do to test the safety and viability of this approach, but hope we will be able to transfer this into the clinic in the coming years. 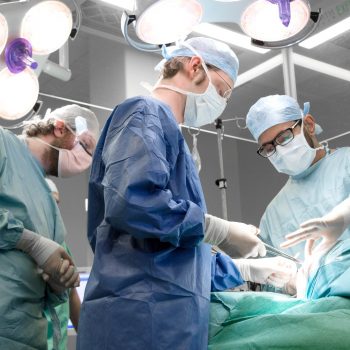