Cambridge researchers studying the HIV virus have helped create a garden at this year’s Chelsea Flower Show to highlight the plight of young people living with the condition.

Cambridge-based Professor Andrew Lever is part of the CHERUB network of researchers from NIHR Biomedical Research Centres in Cambridge, London and Oxford who are searching for a cure for HIV.

Current treatments suppress the virus very effectively and people remain well but eradication is not yet possible so treatment has to be lifelong.

The CHERUB collaboration was formed to investigate new ways to try and cure HIV and has recently concluded a large clinical trial of a novel approach to try and eradicate HIV from those who are infected.

The garden, representing both CHERUB and CHIVA (Children’s HIV Association), A Life Without Walls, was the brainchild of Professor John Frater from Oxford University and Professor Sarah Fidler from Imperial College London, and designed by Naomi Ferrett-Cohen.

Prof Lever said: “The garden symbolises the obstacles and darkness that young people living with HIV have to face but it’s also full of hope – the end of the journey leads you to a bright space where the walls have been broken down. 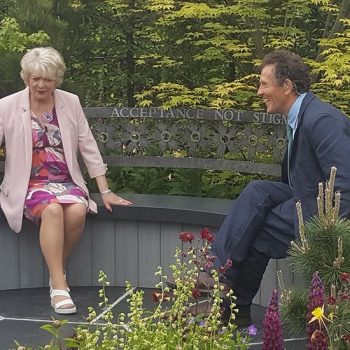 Actor Alison Steadman and gardener and broadcaster Monty Don in the CHERUB garden A Life Without Walls.

“This represents a society where these young people are accepted without prejudice and feel happy and confident to open up about their HIV, without fear of judgement.”

HIV is now treatable but young people living with the condition may have suffered multiple bereavements and/or taken on caring responsibilities. On top of this they must manage growing up with a highly stigmatised chronic illness.

Prof Lever said: “The garden represents the breaking down of this stigma and intends to show that anyone can live well and openly with HIV.”

The garden also has another message – that everyone needs to work hard to find a cure through dedicated scientific research.

The RHS Chelsea Flower Show takes place at the Royal Chelsea Hospital from 22-26 May. For more information about the work of CHERUB see cherub.uk.net or follow CHERUB on Twitter: @ukcherub or see pictures of the garden. 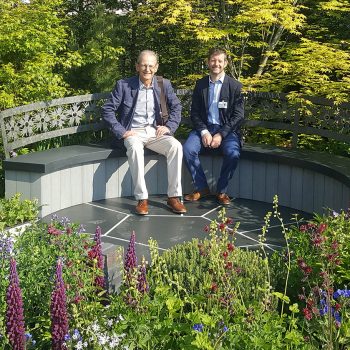