Cambridge researchers funded by Action Medical Research and the NIHR Cambridge BRC are investigating the impact interruptions in sleep cycles – such as loud noises – have on the development of brain activity in preterm babies in neonatal intensive care (NICU).

The study is significant as preterm babies develop in an environment that is very different from the womb.

The frequent and often painful procedures, bright lights and loud noises in NICU interrupt the natural sleep cycles which are essential for normal brain development – and there is increasing evidence that the different sleep cycles in babies, known as active and quiet sleep, play an important role in the early development of the brain.

In this study, changes in blood flow and oxygen levels will be measured in different parts of the brain using a non-invasive wearable technology, similar to a swimming cap, worn on the head during the quiet and active sleep cycles of very preterm and healthy term infants. This optical imaging technology is called high-density diffuse optical tomography (HD-DOT), and it images functional connections in the brain at the cot-side.

Consultant Neonatologist Professor Topun Austin, who is also Director of the NIHR Cambridge BRC facility the Evelyn Perinatal Imaging Centre, said: “The results from this study could have long-term implications for the care of preterm babies, as this will increase understanding of the sleep states that promote the development of the brain.

“Ultimately this could lead to a traffic light system next to cots, with a red light to indicate a baby is in active or quiet sleep and should not be disturbed, and a green light when the baby is transitioning between sleep states, indicating that the baby can be woken up for tests, feeding or other care.”

In previous research in healthy term infants, Professor Austin and his team showed there was a significant difference in functional connectivity in different sleep states – with babies in active sleep having more connections crossing the brain hemispheres compared with quiet sleep.

This research is needed as in the UK one in every 13 babies are born too soon – before 37 weeks of pregnancy – and around 8,000 babies are born before 32 weeks. Advances in treatment have led to improved survival, however preterm babies have an increased risk of long-term neurodevelopmental complications. Very preterm babies, born before 32 weeks, are at a higher risk of developing behavioural and emotional problems and poor sleep. 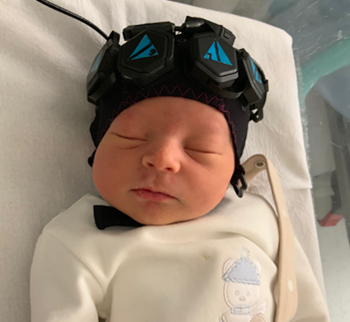