A Cambridge device to spot early signs of cancer is being trialled for the first time to GP patients in the UK.

The cytosponge or ‘pill on a string’ has been designed to help detect the early stages of oesophageal cancer.

Developed by the University of Cambridge and supported by the NIHR Cambridge BRC and NIHR Cambridge Clinical Research Facility, the device is now being trialled with GP patients in a mobile unit – the first of its kind.

Patients who are being treated for heartburn from Cambridgeshire GP practices will be some of the first in the UK to have the simple 10-minute test outside a hospital setting.

The hope is this new, quick and potentially life-saving device will detect the early signs of oesophageal cancer and treatment can begin a lot sooner.

What is the cytosponge?

The cytosponge, developed by Professor Rebecca at the University of Cambridge, is a small pill with a thread attached that the patient swallows, which expands into a small sponge when it reaches the stomach.

It is quickly pulled back up the throat by a nurse, collecting cells from the oesophagus which will be sent for analysis.

The procedure takes around 10 minutes and can be performed in a GP surgery.

The BEST3 trial involved more than 13,000 people and included research through GP practices which was facilitated by the Cambridgeshire and Peterborough Clinical Commissioning Group.

Now a cytosponge mobile unit known as the Heartburn Sponge Test unit (pictured top right) which has been funded and equipped jointly by Heartburn Cancer UK and Innovate UK funded Project DELTA will start seeing patients. After Cambridge it will move on to Essex and then Suffolk as the pilot aims at proving a wider benefit to the NHS.

One person who is thankful for the new device is Liz Chipchase from Cambridge.

Liz joined the BEST3 medical trial to help out. She’d been treated for acid reflux/heartburn for 40 years but didn’t expect any issues to show up. The results of the sponge test revealed she, in fact, had oesophageal cancer.

Fortunately – she feels ‘completely well thanks’ to the sponge test trial – it was found at an early stage and was treatable.

Liz was one of the lucky ones. Because oesophageal cancer is often found late, is more usually fatal. Only 17% of people diagnosed with it live for a further five years or more after diagnosis.

It is hoped the cytosponge could one day become a test used by GP surgeries throughout the country to identify potential issues for people who are on long-term heartburn medication, or when someone has had heartburn or indigestion for three weeks or more. 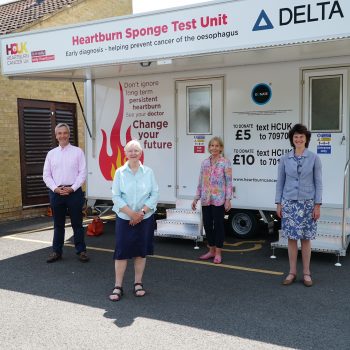