New research shows that blood donors could safely give blood more frequently than is allowed at present. At the moment in the UK men can give blood every 12 weeks, women every 16 weeks. The new research may lead to the official recommendations being changed and the intervals between donations shortened.

Blood donations began more than a century ago but until now there has been no research to discover how frequently donors can give blood without it affecting their health.

The study showed that, over a two-year period, allowing donors to give blood more frequently boosted the supply of blood to the NHS without having a major impact on their health.

The study, published in the Lancet, was carried out by a team from Cambridge and Oxford Universities and NHS Blood and Transplant.

Supported by the UK Medical Research Council , British Heart Foundation and NIHR Cambridge Biomedical Research Centre the study involved 45,000 blood donors. The men were randomly assigned to groups giving blood at 8-, 10- and 12-week intervals; the women to groups giving blood at 12-, 14- or 16-week intervals. The results showed that, giving blood at the shorter intervals resulted in much more blood being collected without it having a major impact on the donors’ quality of life, mental function or physical activity. However, some of those who gave blood more frequently did report minor symptoms including tiredness and restless legs, and the research suggests this may have been due to giving blood.

According to the lead author, Dr Emanuele Di Angelantonio from the University of Cambridge, the study also showed that donors who weighed above average and those with higher initial stores of iron were able to give more blood.

Senior author Professor John Danesh, also from the University of Cambridge, said, “Our data give blood services the short-term option of more frequent collection from donors if the supply falls or demand rises. We have also measured how much iron is lost after two years of repeated donation, and this will help towards framing the safety guidelines in countries where blood donation is more frequent than in the UK.”

The results from the trial suggest that better screening methods should be sought to detect low haemoglobin in potential donors. NHS Blood and Transplant and the University of Cambridge have started the COMPARE study to test different ways to measure when a donor is anaemic and should not give blood.

According to another senior author, Professor Dave Roberts from the Univesity of Oxford, ‘In the future we can use our results to predict which donation intervals suit individual donors and move towards a more personalized donation interval.’

One of the donors who took part in the study, Paul Harvey, comes from a family of blood donors and both he and his brother were delighted to sign up.

‘I was on a 10 week cycle and the specialist team who looked after us made it easy to book my appointments for my next donation. Being able to give blood is a great way of giving something back to society and it is nice to know we might be able to do it more frequently as a result of this study”

Gail Miflin, NHS Blood and Transplants Medical and Research Director commented that “The INTERVAL study has shown how effectively we can collaborate with leading academics to generate the evidence to support our clinical practices.  Our collection teams have been able to run donor recruitment and donation at different intervals within their normal working environment.”  She added that “We now need to review the findings in greater depth to understand which donors can safely donate more frequently without this having an adverse impact on their iron stores.  The study clearly shows that some donors could donate more frequently than the current donation intervals but it also highlights that some donors should donate at longer intervals.” 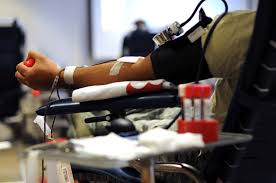