An artificial pancreas developed by a team of Cambridge researchers and supported by the NIHR Cambridge Biomedical Research Centre is helping protect very young children with type 1 diabetes at a particularly vulnerable time of their lives. A study published today (20 January) found that it is both safe to use and more effective at managing their blood sugar levels than current technology.

Writing in the New England Journal of Medicine, researchers compared the performance of the artificial pancreas, which uses an algorithm to determine the amount of insulin administered by a device worn by the child, against ‘sensor-augmented pump therapy’.

Management of type 1 diabetes is challenging in very young children, because of a number of factors including the high variability in levels of insulin required and in how individual children respond to treatment, and their unpredictable eating and activity patterns. Children are particularly at risk of dangerously low blood sugar levels (hypoglycaemia) and high blood sugar levels (hyperglycaemia). Previous studies have linked prolonged hyperglycaemia in children with type 1 diabetes with lower IQ scores and slower brain growth.

To manage children’s glucose levels, doctors increasingly turn to devices that continuously monitor glucose levels and deliver insulin via a pump, which administers insulin through a cannula inserted into the skin. These devices have proved successful to an extent in older children, but not in very young children.

Current technology – sensor-augmented pump therapy – requires parents to review their child’s glucose levels using a monitor and then manually adjust the amount of insulin administered by the pump.

Professor Roman Hovorka from the Wellcome-MRC Institute of Metabolic Science at the University of Cambridge, pictured left, has developed an app – CamAPS FX – which, combined with a glucose monitor and insulin pump, acts as an artificial pancreas, automatically adjusting the amount of insulin it delivers based on predicted or real-time glucose levels. It is a ‘hybrid closed loop system’, meaning that the child’s carer will have to administer insulin at mealtimes, but at all other times the algorithm works by itself. There are no commercially available versions of fully closed loop systems yet.

Professor Hovorka explained: “CamAPS FX makes predictions about what it thinks is likely to happen next based on past experience. It learns how much insulin the child needs per day and how this changes at different times of the day. It then uses this to adjust insulin levels to help achieve ideal blood sugar levels. Other than at mealtimes, it is fully automated, so parents do not need to continually monitor their child’s blood sugar levels.”

Working across seven centres in the UK and Europe, Professor Hovorka and an international team of researchers recruited 74 children with type 1 diabetes, aged one to seven years, to take part in their trial.  The trial compared the safety and efficacy of hybrid closed-loop therapy with sensor-augmented pump therapy. All children used the CamAPS FX hybrid closed-loop system for 16 weeks, and then used the control treatment (sensor-augmented pump therapy) for 16 weeks.

On average, children spent around three-quarters of their day (71.6%) in the target range for their glucose levels when using CamAPS FX – almost nine percentage points higher compared to the control period, accounting for an additional 125 minutes per day in the target range.

The children spent less than a quarter (22.9%) of their time with raised blood sugar levels – hyperglycemia – while using CamAPS FX, almost nine percentage points lower than during the control period. There was no difference between the two groups in the time spent in hypoglycemia.

The app reduced average blood sugar levels – a measurement of a molecule known as glycated haemoglobin, or HbA1c. Glycated haemoglobin develops when haemoglobin, a protein within red blood cells that carries oxygen throughout the body, joins with glucose in the blood, becoming ‘glycated’. By measuring HbA1c, clinicians are able to get an overall picture of what a person’s average blood sugar levels have been over a period of weeks or months. For people with diabetes, the higher the HbA1c, the greater the risk of developing diabetes-related complications.

At baseline, average HbA1c levels were 7.3% – the app reduced this by 0.7 percentage points. This is particularly noteworthy as the study participants had good glycaemic control – that is, relatively low HbA1c – to begin with, and it is often hard to improve glucose control without having more low blood glucose events (hypoglycaemia).

Dr Julia Ware, the study’s first author, also from the Wellcome-MRC Institute of Metabolic Science, said: “Very young children are extremely vulnerable to changes in their blood sugar levels. High levels in particular can have potentially lasting consequences to their brain development. On top of that, diabetes is very challenging to manage in this age group, creating a huge burden for families.

“CamAPS FX led to improvements in several measures, including hyperglycaemia and average blood sugar levels, without increasing the risk of hypos. This is likely to have important benefits for those children who use it.”

One of the biggest challenges reported by families of young children with type 1 diabetes is poor sleep quality, as variability in insulin requirements and parental fear of hypoglycemia are highest overnight. In their study, the researchers found that more than 80% of overnight sensor readings were within the target range, showing that hybrid closed-loop therapy addresses the ‘night-time problem’ more effectively than sensor-augmented pump therapy.

Dr Ware added: “Parents have described our artificial pancreas as ‘life-changing’ as it meant they were able to relax and spend less time worrying about their child’s blood sugar levels, particularly at night time. They tell us it gives them more time to do what any ‘normal’ family can do, to play and do fun things with their children.”

CamAPS FX is already having an impact on the lives of children and their families. It is available through a number of NHS trusts across the UK, including Cambridge University Hospitals NHS Foundation Trust, and the team hope it will soon be available even more widely.

Professor Hovorka added: “From the first clinical trials of our algorithms to today’s findings has taken well over a decade, but the dedication of my team and the support of all the children and families who have taken part in our studies, has paid off. We believe our artificial pancreas will transform the lives of families with very young children affected by type 1 diabetes.”

The research was funded by the European Commission’s Horizon 2020 Framework Programme, with additional support from the NIHR Cambridge Clinical Research Facility and JDRF.

“I feel like for the first time since the diagnosis I can relax”: Sofia and Sam’s story

Over the past three years Sam Wright, mother to Sofia (aged 6), pictured above, has endured the tremendously steep learning curve any parent of a child with type 1 diabetes has to undergo. A whirlwind of finger prick tests, injections and sensors later, she has now discovered the CamAPS FX app and the hybrid closed-loop system and would not be without it.

In a hot summer, excessive thirst wouldn’t be anything out of the ordinary for a young child. However, Sam and her mother followed their intuition that Sofia’s condition could be something more serious and began to research if there was any cause for concern, which ultimately led to her diagnosis of type 1 diabetes.

“The diagnosis changed everything forever,” says Sam. “I can remember the first few weeks like it was yesterday. Almost overnight I felt like I needed to be an expert in diabetes to best care for my little girl. She is my absolute priority, so I just did it, and I feel really proud of myself and my mum for doing it – she’s been on this journey with us from the beginning.”

Like most parents with a newly diagnosed child with type 1 diabetes, Sam quickly became an expert at finger prick tests, basal and bolus insulin dosing and what to do when her daughter was hypoglycaemic. Injecting your child would be a challenge for any parent, but Sam also had to overcome her own fear of needles.

“The clinical team at Addenbrooke’s Hospital were amazing at helping me overcome some big challenges in those early days, especially Adam Dawes, Clinical Nurse Specialist at the hospital. I don’t think we’d be where we are today without the support of Adam and the clinical team.”

In the first few months of Sofia’s diagnosis, finger prick tests were a regular occurrence to understand blood glucose levels throughout the day. Sam also had to set alarms at night so she could check her daughter’s blood glucose levels. If Sofia’s levels were high or low, Sam would have to administer a corrective dose and then wait until her levels were moving in the right direction before going back to sleep, an exhausting process for both every single night.

Eventually Sofia received a continuous glucose monitor (CGM) to support her care. This is a small device with a sensor worn just under the skin to measure glucose levels continuously. Sam saw the CGM as a step in the right direction, particularly as the device meant she no longer had to set alarms at night – the device would alert her automatically if Sofia’s glucose levels were out of range. It also syncs with Sam’s phone so she can check Sofia’s blood glucose levels at school and it also helps teachers with care through the day.

In January 2020 Sam was introduced to the CamAPS FX app. She hasn’t looked back since.

Sam had never heard of the hybrid closed-loop system, or the CamAPS FX app before, but when Sofia was invited to take part in the KidsAP research trial, led by the University of Cambridge, she “jumped in with both feet”.

“I have full trust in the CamAPS FX app and I feel like for the first time since the diagnosis I can relax,” she says. The time Sofia spends within her target blood glucose range has improved and it is much easier now to control her levels. “It’s a complete weight off my shoulders.”

The app has also reduced the burden for Sofia’s teachers. Sam is able to check on her daughter remotely, but has the reassurance that she will receive automated text messages if Sofia’s glucose levels are going high or low.

“You wouldn’t know that she is any different from any of her classmates and that is thanks to the CamAPS FX app.”

Sam says it makes sense for children of Sofia’s age to have the closed-loop, because their bodies are constantly changing how they respond to insulin. It is an extremely difficult ask for a parent to manage their child’s condition without significant highs and lows, whereas the app learns and adapts instantly. It is beneficial for the child’s long-term management of the condition and enables both children and their parents to sleep at night.

“I would never be without the app,” says Sam. “It is something looking out for you so you don’t have to worry. To anyone considering it, just go for it. It is a game changer and you won’t look back or want to be without it once you’ve had it. I completely believe it is so beneficial for both the parents and the child.” 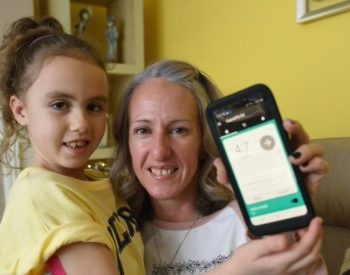