Recent advances in brain imaging have enabled scientists to show for the first time that a key protein which causes nerve cell death spreads throughout the brain in Alzheimer’s disease – and hence that blocking its spread may prevent the disease from taking hold.

An estimated 44 million people worldwide are living with Alzheimer’s disease, a disease whose symptoms include memory problems, changes in behaviour and progressive loss of independence. These symptoms are caused by the build-up in the brain of two abnormal proteins: amyloid beta and tau. It is thought that amyloid beta occurs first, encouraging the appearance and spread of tau – and it is this latter protein that destroys the nerve cells, eating away at our memories and cognitive functions.

Until a few years ago, it was only possible to look at the build-up of these proteins by examining the brains of Alzheimer’s patients who had died, post mortem. However, recent developments in positron emission tomography (PET) scanning have enabled scientists to begin imaging their build-up in patients who are still alive: a patient is injected with a radioactive ligand, a tracer molecule that binds to the target (tau) and can be detected using a PET scanner.

In a study published today in the journal Brain, a team led by scientists at the University of Cambridge describe using a combination of imaging techniques to examine how patterns of tau relate to the wiring of the brain in 17 patients with Alzheimer’s disease, compared to controls.

Quite how tau appears throughout the brain has been the subject of speculation among scientists. One hypothesis is that harmful tau starts in one place and then spreads to other regions, setting off a chain reaction. This idea – known as ‘transneuronal spread’ – is supported by studies in mice. When a mouse is injected with abnormal human tau, the protein spreads rapidly throughout the brain; however, this evidence is controversial as the amount of tau injected is much higher relative to brain size compared to levels of tau observed in human brains, and the protein spreads rapidly throughout a mouse’s brain whereas it spreads slowly throughout a human brain.

There are also two other competing hypotheses. The ‘metabolic vulnerability’ hypothesis says that tau is made locally in nerve cells, but that some regions have higher metabolic demands and hence are more vulnerable to the protein. In these cases tau is a marker of distress in cells.

The third hypothesis, ‘trophic support’, also suggests that some brain regions are more vulnerable than others, but that this is less to do with metabolic demand and more to do with a lack of nutrition to the region or with gene expression patterns.

Thanks to the developments in PET scanning, it is now possible to compare these hypotheses.

“Five years ago, this type of study would not have been possible, but thanks to recent advances in imaging, we can test which of these hypotheses best agrees with what we observe,” says Dr Thomas Cope from the Department of Clinical Neurosciences at the University of Cambridge, the study’s first author.

Dr Cope and colleagues looked at the functional connections within the brains of the Alzheimer’s patients – in other words, how their brains were wired up – and compared this against levels of tau. Their findings supported the idea of transneuronal spread, that tau starts in one place and spreads, but were counter to predictions from the other two hypotheses.

“If the idea of transneuronal spread is correct, then the areas of the brain that are most highly connected should have the largest build-up of tau and will pass it on to their connections. It’s the same as we might see in a flu epidemic, for example – the people with the largest networks are most likely to catch flu and then to pass it on to others. And this is exactly what we saw.”

Professor James Rowe, senior author on the study, adds: “In Alzheimer’s disease, the most common brain region for tau to first appear is the entorhinal cortex area, which is next to the hippocampus, the ‘memory region’. This is why the earliest symptoms in Alzheimer’s tend to be memory problems. But our study suggests that tau then spreads across the brain, infecting and destroying nerve cells as it goes, causing the patient’s symptoms to get progressively worse.”

Confirmation of the transneuronal spread hypothesis is important because it suggests that we might slow down or halt the progression of Alzheimer’s disease by developing drugs to stop tau from moving along neurons.

The same team also looked at 17 patients affected by another form of dementia, known as progressive supranuclear palsy (PSP), a rare condition that affects balance, vision and speech, but not memory. In PSP patients, tau tends to be found at the base of the brain rather than throughout. The researchers found that the pattern of tau build-up in these patients supported the second two hypotheses, metabolic vulnerability and trophic support, but not the idea that tau spreads across the brain.

The researchers also took patients at different stages of disease and looked at how tau build-up affected the connections in their brains.

In Alzheimer’s patients, they showed that as tau builds up and damages networks, the connections become more random, possibly explaining the confusion and muddled memories typical of such patients.

In PSP, the ‘highways’ that carry most information in healthy individuals receives the most damage, meaning that information needs to travel around the brain along a more indirect route. This may explain why, when asked a question, PSP patients may be slow to respond but will eventually arrive at the correct answer. 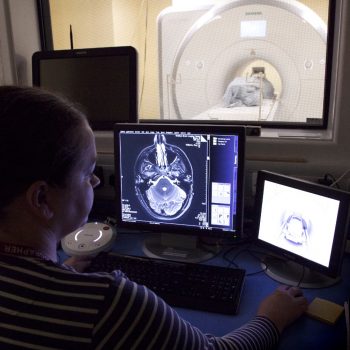