More than 100 children with cancer from across the East of England have had their tumours tested by whole genome sequencing at Addenbrookes Hospital and supported by the NIHR Cambridge BRC, to help improve their diagnosis and treatment.

In cancer, Whole Genome Sequencing looks at the ‘whole genome’ or entire genomic (DNA) profile of a patient as well as the cancer.

For children with cancer, scientists look for differences, known as ‘variants’ or ‘mutations’, in the DNA from their tumour compared with their blood. This helps doctors and scientists give a far more detailed and personalised diagnosis, in some cases providing clues to the most effective treatments for each patient. Data from the first 36 children, who consented to the test as part of the national 100,000 Genome Project cohort, has now been published in the British Journal of Cancer.

The published findings, also shared at the 2021 National Cancer Research Institute (NCRI) Festival, described 23 different solid tumour types, and revealed several potentially important variants. In a number of cases, the information either refined or changed the children’s diagnosis, revealed new information about the children’s prognoses, showed hereditary causes, or revealed treatments that might not otherwise have been considered.

A further 65 patients across the region have had their whole genomes read since the test was made routinely available through the NHS Genomic Medicine Service at the start of 2021. Early review of the data and outcomes shows that these results continue to demonstrate the value of centralised WGS for children with cancer.

Aubrey, from Bedfordshire, was diagnosed with cancer in January 2021 when she was only 16 months old. However, as the actual type of Aubrey’s cancer was not certain from standard testing, her parents Anna and Paul agreed to a WGS test for Aubrey.

Anna, Aubrey’s mother said: “The test gave us a confirmed diagnosis for Aubrey after other tests had narrowed it down to one of two potential types of cancer. The result meant that the clinicians could be more confident as to the best treatment to use.

“Whist we still have a challenging journey with Aubrey’s diagnosis and treatment, we were relieved to know that she did not have cancer that was inherited, and hence we did not have to worry that it could affect our son or other members of the family as well.

Professor Matthew Murray, Honorary Consultant Paediatric Oncologist, Cambridge University Hospitals, pictured left, said: “Seeing 100 children with cancer benefit from WGS is a milestone. Overall, as a result of these tests, we’ve been able to confirm or refine the diagnosis for many of the children, identify and in some cases start new and beneficial treatment, and importantly in others have a clearer idea of the likely course of a patient’s cancer.”

Following referral, the NHS pathway allows patients and family to meet the clinical team at CUH to discuss the next steps.

Once consent to WGS had been obtained, a sample of tumour (usually taken from a previous procedure) is sent alongside a blood sample via the NHS East Genomic Laboratory Hub (NHS East GLH) to the company Illumina – located a few miles away from CUH. Samples are then sequenced at Illumina and results sent back for discussion at a meeting with the patient’s clinical team as well as expert scientists from the NHS East GLH to decide on best patient management.

This data has been released to coincide with the publication of the results from the patients enrolled in the 100,000 genome project in the British Journal of Cancer.

The research was supported by the NIHR Cambridge Biomedical Research Centre. 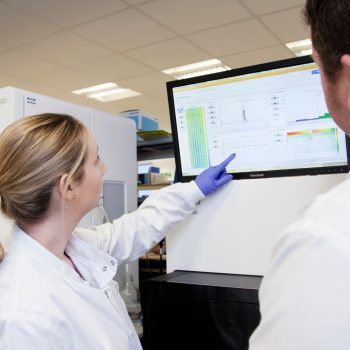