A new diagnostic test that can diagnose COVID-19 in a hospital setting faster than standard testing methods has been able to halve patients waiting times.

Originally used for diagnosing HIV across Africa, SAMBA II machines were deployed in the ED and holding wards at Addenbrooke’s hospital to help detect COVID-19 in patients as part of a research trial called COVIDx.

Researchers investigated whether using the new machines could accurately provide a faster diagnosis than standard testing practices and review how it would affect patient waiting times.

After collecting nose and throat swabs from over 140 patients, the samples were processed using the SAMBA II machine. Researchers found they were able to provide an accurate diagnostic result within 90 minutes, compared to the standard 24-48-hour lab waiting time.

Researchers also reviewed the length of time patients spent in on the ‘holding’ ward before they were admitted to the hospital or discharged. They compared the electronic patents records of all those who had in-hospital tests done in the 10 days before and then after the switch to diagnosis by SAMBA II machines at the hospital.

They found waiting times halved from 58.5 hours to 30 hours and saw a fall in the use of single-occupancy ‘isolation’ rooms in which COVID-19 patients are ideally treated, freeing up hospital beds.

With this new evidence, the hospital has switched most of their testing methods to the SAMBA II machines to diagnose patients with suspected COVID-19.

Professor Ravi Gupta from the Cambridge Institute for Therapeutic Immunology and Infectious Disease, who led the COVIDx study said: “Rapidly testing admissions for SARS-CoV-2 at the point of care is essential for reducing COVID-19 transmission in hospitals, speeding up access to urgent care and allowing safe discharge to care homes. Keeping surgical bays open means fewer cancelled operations and speeding up access to life-saving clinical intervention.”

Researcher, Dr Dami Collier said: “Our research demonstrates that point-of-care testing with SAMBA II machines is not only reliable, accurate and much faster, but that the diagnostic speed leads to significant real-world improvements for patient care and safety.”

CUH Medical Director, Dr Ashley Shaw, said: “Point of Care testing has been hugely beneficial in enabling our clinical teams to make well-informed and timely decisions, keeping patients and staff as safe as possible throughout this difficult period.” 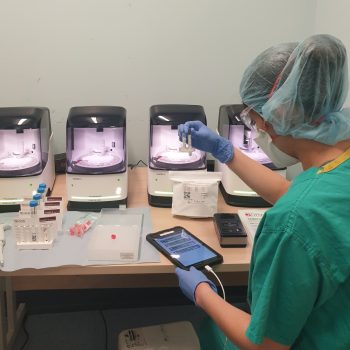