Researchers investigated whether portable air filtration/UV sterilisation devices could reduce airborne SARS- CoV-2 in general wards that had been repurposed as a COVID ward and a COVID Intensive Care Unit (ICU) or ‘surge wards’.

The team installed a High Efficiency Particulate Air (HEPA) air filter/UV steriliser in two repurposed COVID-19 units. HEPA filters are made up of thousands of fibres knitted together to form a material that filters out particles above a certain size.

On the ICU, the team found limited evidence of airborne SARS-CoV-2 in the weeks when the machine was switched off and traces of the virus on one sampling day when the machine was active. Additionally, the air filters significantly reduced levels of bacterial, fungal and other viral bioaerosols on the both the surge ward and the ICU, highlighting an added benefit of the system.

This discovery could have implications for improving the safety of repurposed ‘surge wards’, the researchers say it also opens up the possibility of being able to set standards for cleaner air to reduce the risk of airborne transmission of infections.

This research was supported by the NIHR Cambridge BRC and led by doctors, scientists and engineers at Addenbrooke’s and the University of Cambridge in January 2021, at the height of the second wave of the pandemic. 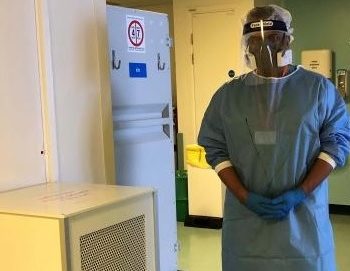