Home » Expandables » Pfizer BioNTech vaccine likely to be effective against B1.1.7 strain of SARS-CoV-2

Pfizer BioNTech vaccine likely to be effective against B1.1.7 strain of SARS-CoV-2

However, when the E484K mutation – first seen in the South African variant – is added, it substantially increases the amount of antibody required to prevent infection.

The preliminary data also suggest that a significant proportion of over-eighty olds may not be sufficiently protected against infection until they have received their second dose of the vaccine.

As the SARS-CoV-2 virus replicates and spreads, errors in its genetic code can lead to changes in the virus.

Towards the end of 2020, the Cambridge-led COVID-19 Genomics UK (COG-UK) Consortium identified a variant of the virus (now known as B1.1.7) and its emergence led to strict lockdown measures in the UK because of concerns over its transmissibility. There is particular concern that these changes might enable the virus to ‘escape’ the newly-developed vaccines.

The UK has begun rolling out two vaccines – the Pfizer BioNTech vaccine and the Oxford AstraZeneca vaccine. The efficacy of the vaccines can be boosted by a second dose; however, in order to reach as large a number of people as possible in a short amount of time, the government has concentrated on delivering a first dose to as many individuals as possible by giving the second dose at 12 weeks, rather than three.

Researchers at the Cambridge Institute of Therapeutic Immunology & Infectious Disease (CITIID) created a synthetic version of the SARS-CoV-2 virus, known as a pseudovirus. They found that the Pfizer BioNTech vaccine is likely to offer similar protection against B1.1.7 as it does against the previous strain of SARS-CoV-2, however it may be less effective when dealing with E484K mutation, which so far has only been seen in a relatively small number of individuals.

This is an abridged version of the press release which was first published on our website on February 2, 2021. 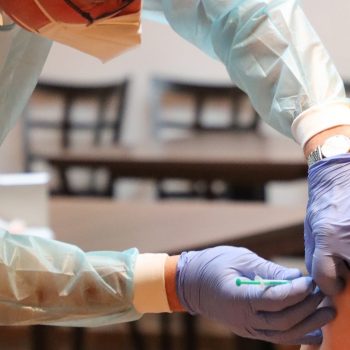