Amy wanted to know in particular if the panel thought there was significant patient benefit – and if the approach was acceptable. She was keen to seek the panel’s views as early as possible in the proposal process to ensure that changes and modifications could be incorporated in her study.

The term prostate cancer describes a group of cancers that arise within the male prostate gland. Around 47,000 men each year are diagnosed with prostate cancer. Both surgery and radiotherapy are considered the gold standard treatment for prostate cancer dependent the stage of the cancer. Almost 90% of those diagnosed with prostate will survive 5 years or more, while 84% will survive 10 years or more. It is therefore vital that we consider the implications of not only the short-term side effects of treatment and prognosis but also the management of long-term side effects (morbidities) and impaired quality of life, both from the patients’ perspective and health economically.

Around 7% of patients experience the late radiation side effects, some of which are as a result of damage to the organs around the prostate during the radiation treatment; and can include diarrhoea, urgency, and erectile dysfunction.

This can cause significant problems for patients and lead to further treatment in the NHS. The study hopes to be able to identify men most at risk and then be able to support them more appropriately during their treatment. Knowing who those patients are will also significantly reduce the financial burden to the NHS as treatment plans can be adjusted.

The panel provided a great deal of feedback to Amy to help her explain her study rationale, also in how she might approach patients around some of the more sensitive questions, particularly concerning erectile dysfunction. Amy attended a panel meeting and gave a very clear and informative presentation followed by a Q&A. This has also helped her to prepare for presenting her work in future to funders and other lay audiences. 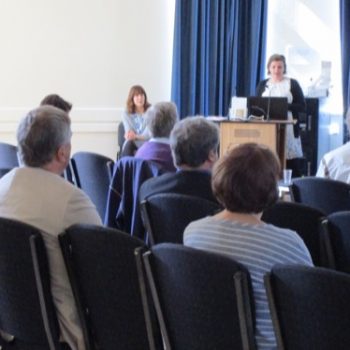