It’s an unlikely love story but when Georgie Bowyer was introduced to the devastating Trypanosome parasite as part of an undergraduate research project, she was hooked: “Trypanosomes 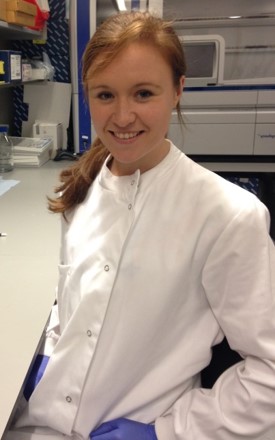 introduced me to the immune system – and the potential of translational research for improving patient lives.”

After finishing her degree in Natural Sciences at the University of Cambridge, Georgie moved to Oxford, where she worked in translational medicine, this time on clinical trials of malaria and Ebola vaccines in the UK and Africa.

Georgie said: “I focused on immune responses to the vaccines and why these were lower in Africans but as I came to the end of my DPhil [Oxford University’s equivalent of a PhD], I became interested in tissue-resident immunity – that is, those immune cells that live in the tissue rather than the blood.”

After completing her DPhil, in March 2019 Georgie moved back to Cambridge as a post-doctoral research associate in Professor Menna Clatworthy’s lab in the Department of Medicine, where she could focus on tissue-resident immunity in the kidney.

Here she is carrying out research to look at how natural killer (NK) cells behave in both healthy human kidneys and in models of chronic kidney disease. Georgie said: “We know a lot about the role of NK cells against virally-infected cells and tumours, but we don’t know what roles they play in the kidney”.

“This research will help us understand more about the immune system in the kidneys – for example how does it respond to an infection? – and this could help inform transplantation decisions.”

The research recently received a ‘pump-priming’ award of £10K from the NIHR Cambridge BRC. These awards are aimed at early-stage researchers, like Georgie, and provide an opportunity for them to obtain initial data which they can use to apply for further grants or applications to external funding agencies.

The NIHR Cambridge BRC has also helped Georgie gauge public reaction to related research, looking at public reaction to the use of donated organs in research: “I wanted to find out how potential organ donors feel about their organs being used for different types of research if they could not be used for transplant.

“It’s a tricky area – obviously there are lots of organs that are donated but which simply can’t be used for transplant purposes and rather than discarding them, we’d like to study them in the lab.”

To help Georgie, the BRC PPI/E team put her in touch with members of the public who also volunteer for the CUH PPI Panel: the results of their feedback are due shortly. And if the results aren’t great? “It’s really important we don’t put people off from donating their organs, so if the panel comes back and they’re really not comfortable with our idea, we would revise the research protocol.”

Georgie has never felt her gender has held her back: “I’ve always worked in teams filled with people from lots of different backgrounds with different perspectives and approaches, and that’s when the most creative ideas come together and the most interesting discoveries happen.”

“Whatever the sector, it’s important that the best people are able to succeed regardless of their gender or background.”

Georgie’s current project comes to an end in 2023, when she will be in a position to apply for further research funding: “I love problem-solving, there’s a real buzz from knowing you could be the first to come up with something new.”

And with Georgie, you feel that’s not beyond the realms of possibility.